Q: I see it written "Power Cat" and "PowerCat." Which is correct?
A: It really is two words, but we use it all the time as one word
primarily from usage on the internet

Q: When was the first year of production? When did the first fiberglass boat "roll" out of the factory?
A: The first of the fiberglass Power Cat boats were made in 1958 at the Bellflower facility in Southern California, This is about 25 miles north of Disney Land.   As stated above the first wood cats  sold were in 1951.

Q: What model was the first Fiberglass boat in the Power Cat line, and does anyone know where it is today?
A: The first model was the a 12 foot runabout in 1957, very few were made and so far only a few have been found.
In 1958 the 14c and the 18c models were produced and many of these survive to this day.

Q: Who designed the first hulls?
A: Power Cat boats founder and President, Ray Leger developed the first catamaran designs for commercial use.

Q: Are PowerCat sailboats made by the same company?
A: No!  Power Cat has now developed into a generic term that includes any and all powered cat based hulls this includes Sail and Power boats.  Power Cat Boats as defined here are as produced by the corporations of Paramount Wood Products, Power Cat Boat Corporation, and Power Cat of Texas, Corp. as produced in Bellflower California from 1951 through 1962 and in Victoria Texas from 1959 through the late 1970’s.  We have not determined the actual end of production of the Power Cat of Texas Corp.

Q: Can you determine the year of a Power Cat boat based on the serial number?
A: We do have a strong chronology based on models and build plates, but we’re not really sure about the S/N yet, but we're working on it.

Q: When and why did Power Cat move to Texas?
A: In an effort to provide better service and faster delivery to all it’s North American customers, all production was centralized in Victoria, Texas in 1962.  The Texas plant was opened in 1959 and Power Cat operated both the California and Texas facilities until 1962.  The corporation remained Power Cat Boat Corporation until 1966 when a fire destroyed the entire plant.  The company reorganized under a new corporation as Power Cat of Texas Corp. and built a new plant facility in Victoria, Texas

Q: I noticed that some PowerCat models are named like Hawaiian, Polynesian and Samoan; while others are just denoted only by model numbers? How is that?
A: The use of these model names was for the 1960 model year only.

Q: So if there is no longer a Power Cat company who is running this website?
A:: :) Well that would be me, Danny Leger, Ray Leger (deceased) is my father, and I was raised in the Power Cat
boat family, and worked in the Calif and Texas plants from age 5 thru 19.  There are many contributors to this
website, many who own and enjoy the Power Cat experience to this day.
Email for Danny Leger >> danny@powercatboat.com 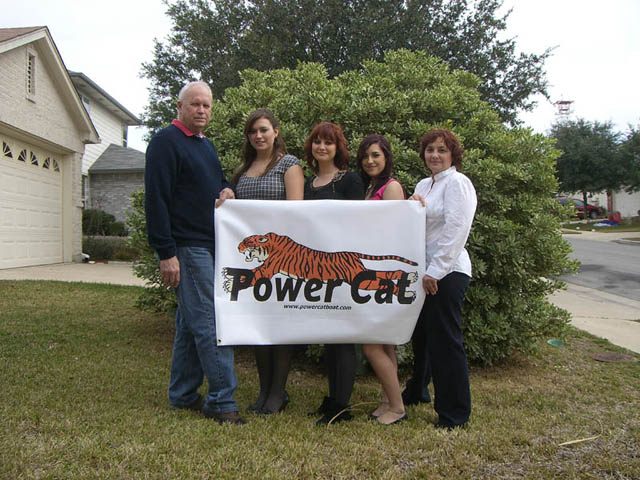