Power Cat Boat Corp. of Bellflower, California originally started building wooden boats as part of "Paramount Wood Products". This company was started by Ray Leger for the production of wood sash and doors for the exploding housing market in Southern California following the end of World War II.

Ray and many of the employees had become friends during W.W.II working for a boat yard in San Pedro that made PT and PBY boats for the military. This gave many of them the skills of carpentry and boat construction that soon would be put to use.

These same groups of friends were avid fishermen and spent much of their spare time with family on the Pacific Ocean fishing. Several of them joined into a part ownership of a renovated landing craft as an offshore fishing boat. After many adventures with this unreliable rig, they sold it when it was still underwater after being sunk at the dock in a storm.  Only recently did I find out that the
name that was used for this boat was the "Ahwahnee" which is the Indian name for Yosemite Valley in California, one of Ray Leger's favorite vacation spots not on the ocean.

One of the stories that circulated in the Los Angeles area newspapers about the idea of the "powered catamaran" was that Ray's wife Evelyn while enjoying the offshore fishing as much as any of them was very prone to seasickness. The catamaran's being more stable in the water made them rock less and this was the supposed reason for the first powered catamaran made by Ray Leger. This idea and many other influences were brought together in the original design but the primary purpose was to build a fishing boat for himself and his friends. It would be reliable and roomy enough yet still be capable of being transported on a trailer rather than require a berth for storage. The twin outboards were inexpensive yet would give the security of having 2 motors in case one failed. The very first PowerCat was an 18 ft cabin cruiser that ran twin Scott Atwater 33 hp outboards. 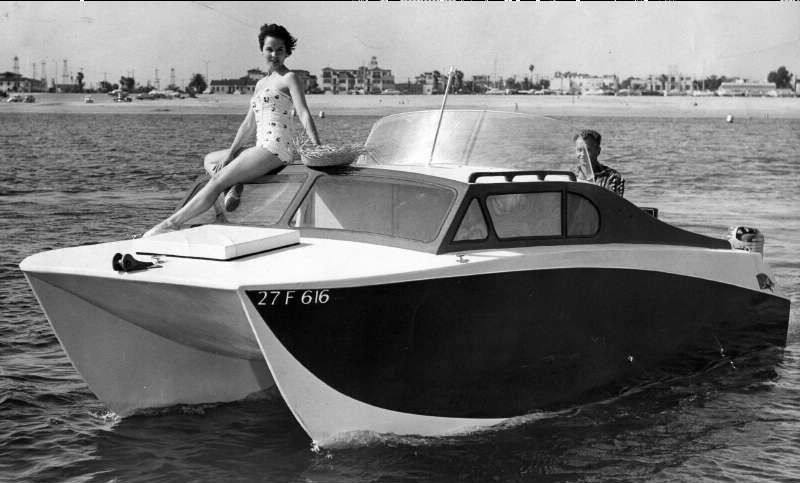 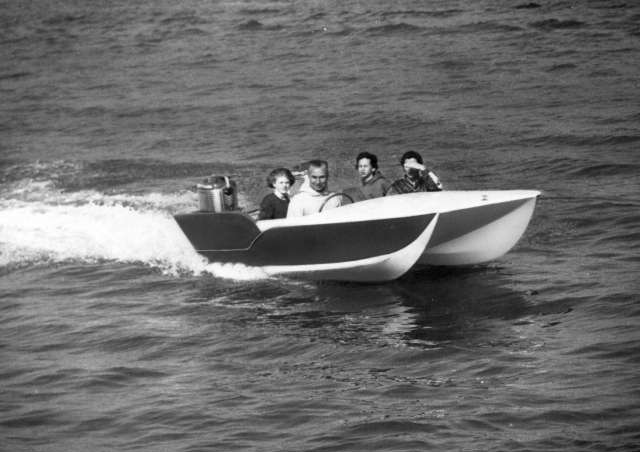 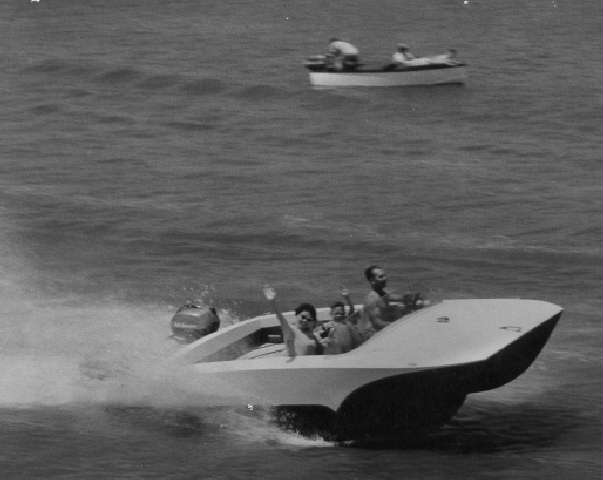 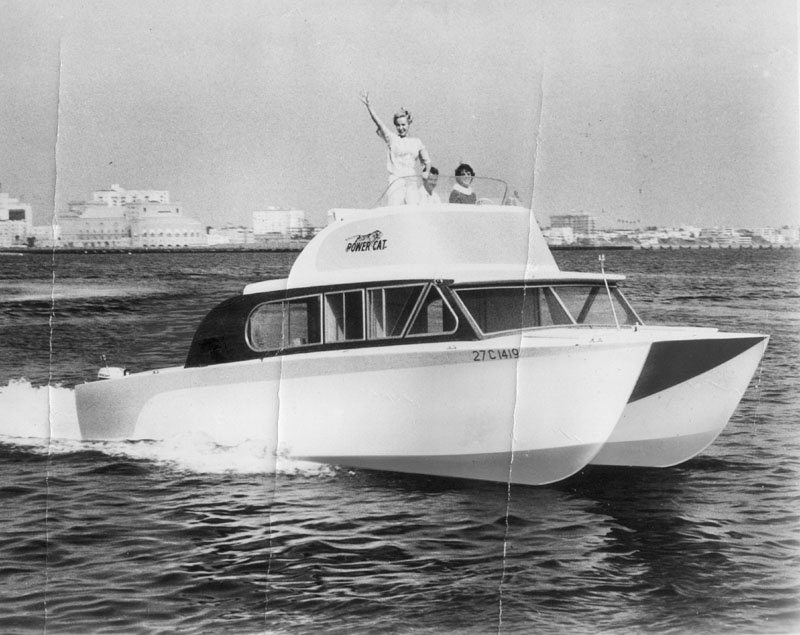 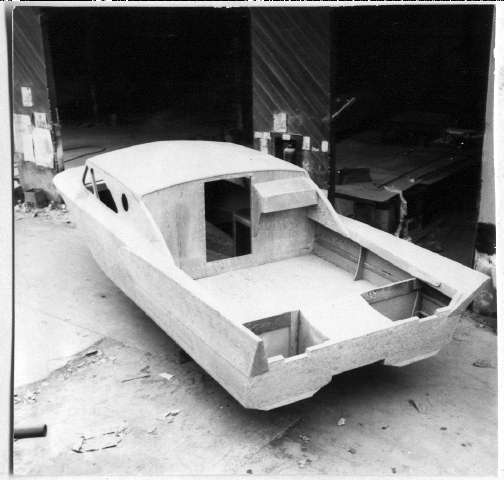 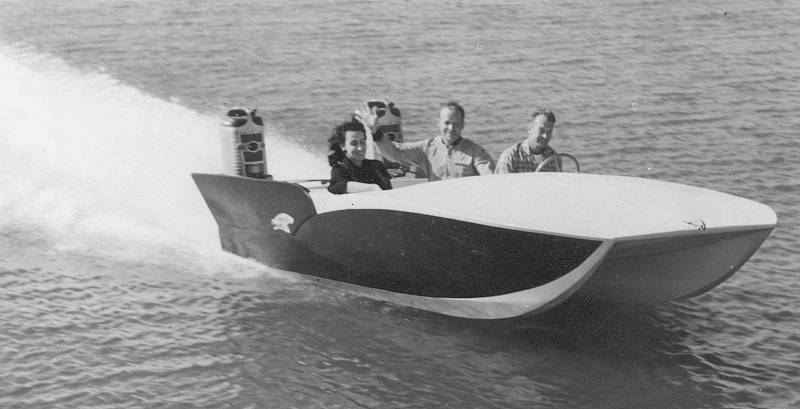 The company focused its efforts on the production of plywood Catamarans Sometime beginning in the early 1950's. All PowerCat boats built through 1972 were the inspirations and brainchild of master boat builder and designer Ray Leger. His designs ran the full gamete from Catamarans, Tri-hull's, Hydro's and Bass boats. We should note that all the earlier plywood Catamarans featured the application of fabulous tail fins (which was the norm in the late 50's) but evidently with the transition to fiberglass construction, (beginning in 1958) the fins were significantly reduced in size, and then phased out all together. PowerCat Boat Corp. regularly produced hulls from 12 ft. to 28 ft. although some custom 30's and 40's were built. 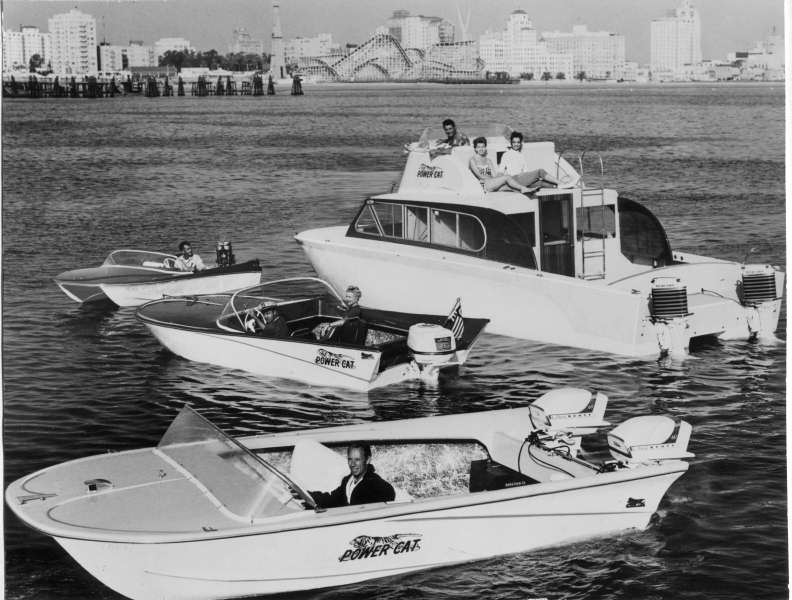 The switch to fiberglass started in 1958 and by 1962 all production models were only made in glass. Some custom models and prototypes continued to be made out of wood, but generally these were not sold to the public. 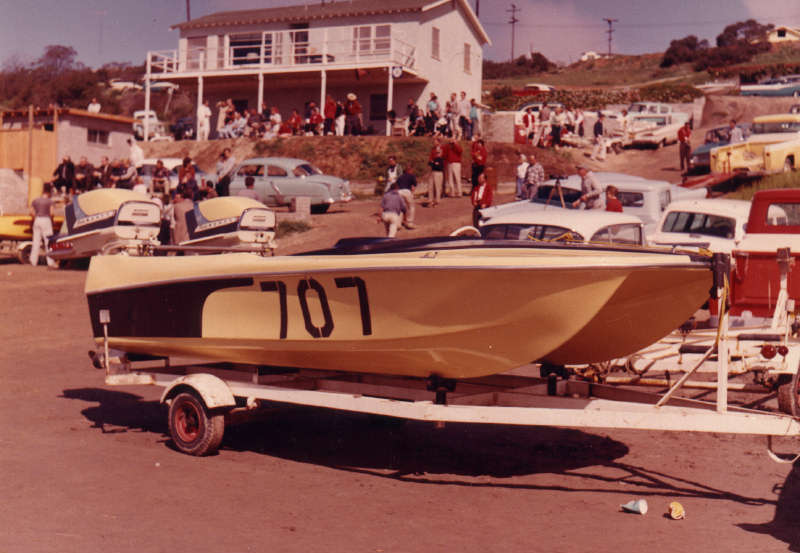 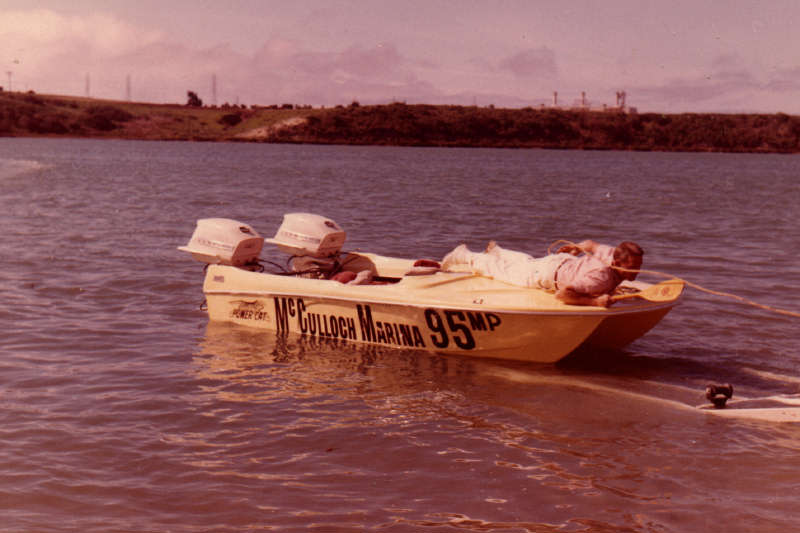 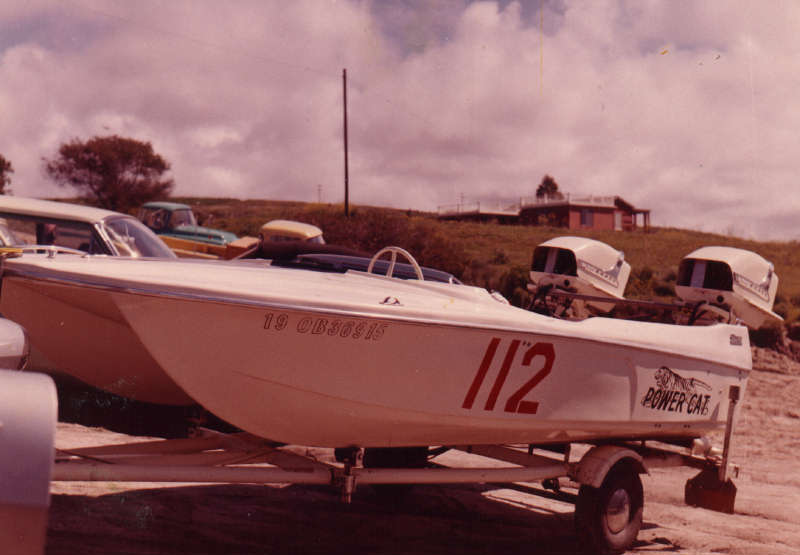 The McCulloch racing team used PowerCat catamarans. They competed successfully in many sprint and endurance races mostly in the western US. 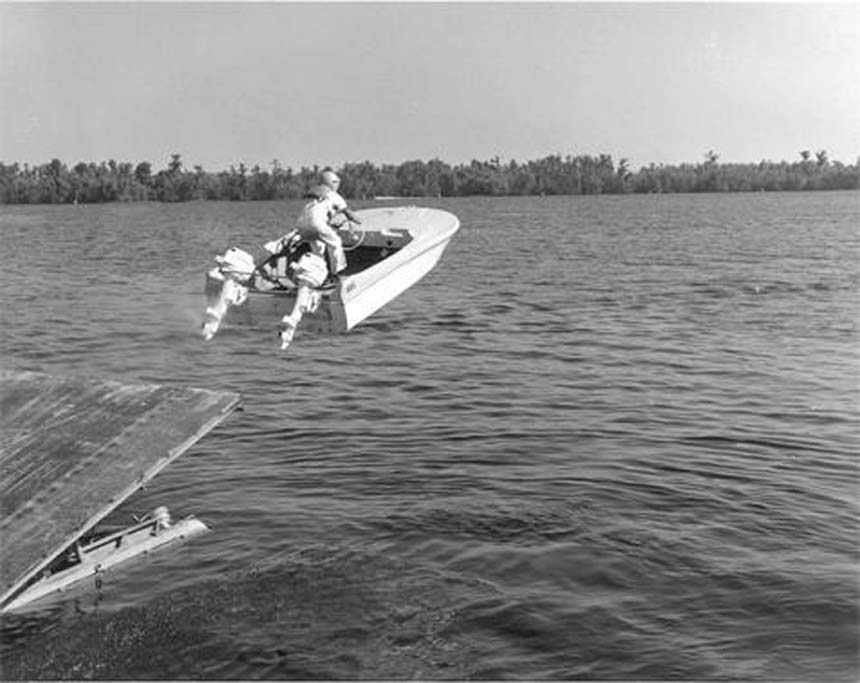 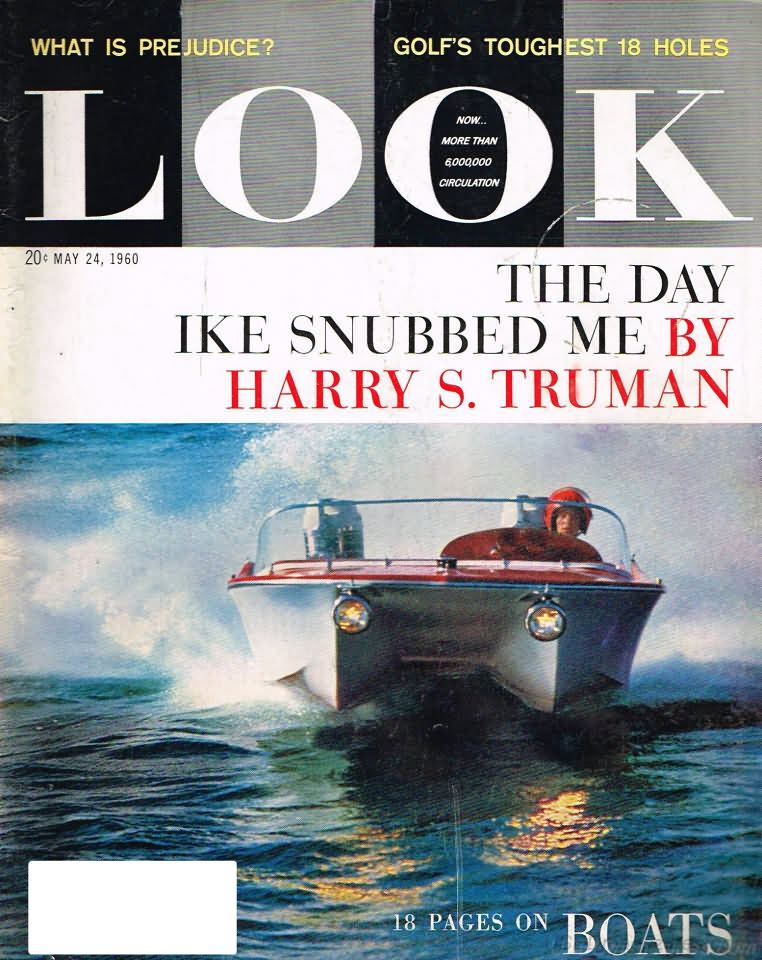 Mercury had a unique relationship with PowerCat. PowerCat furnished Mercury with boats for test beds for their use at Lake X and in the many quasi factory sponsored race teams that ran Mercury motors. In return Mercury furnished PowerCat with the latest in motors for use in their racing efforts. Part of the arrangement was that the motors and boats were returned to their respective factories after they were no longer usable for evaluation of component failures. This helped both PowerCat and Mercury in refining the products. 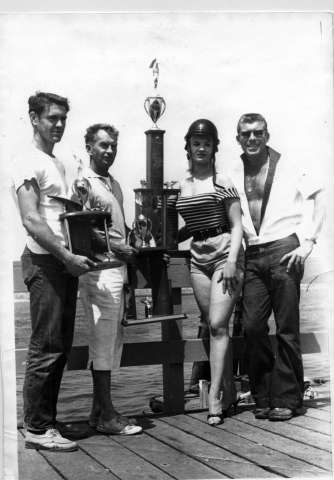 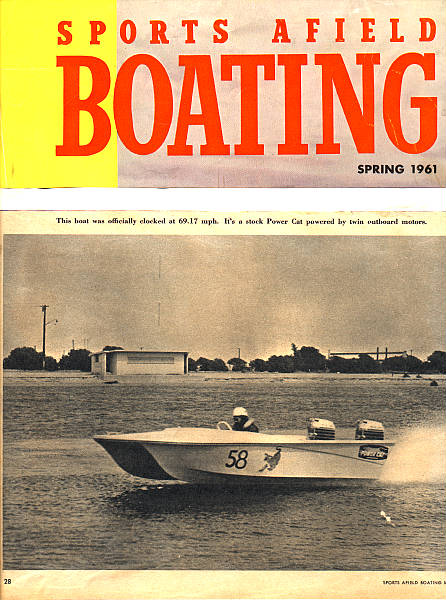 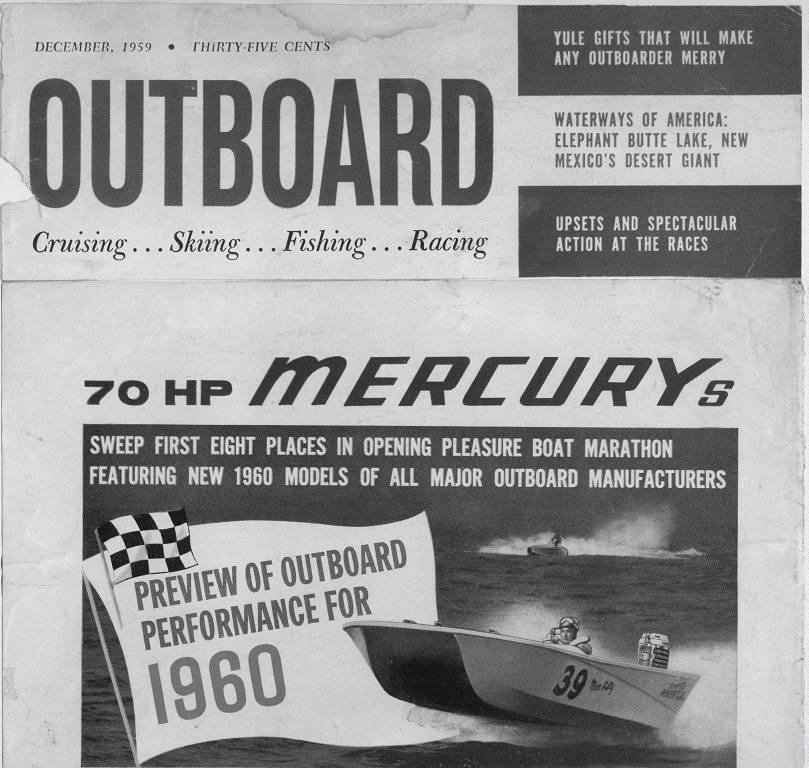 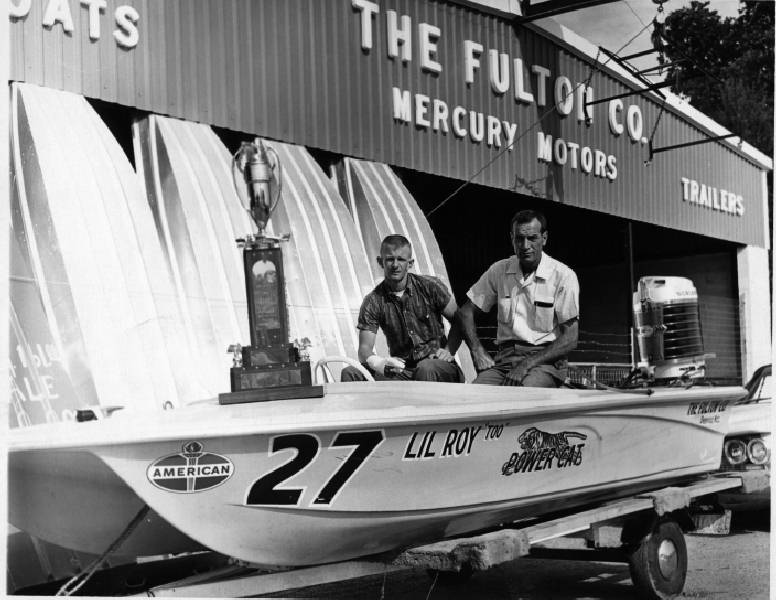 A lot of non-factory sponsored teams also ran PowerCat's, but it was Mercury's exploits with PowerCats, (evidently an advertising bonanza) as well as its success in winning key endurance races in the late 50's and early 60's that won these boats their reputation as true airborne Hot Rod's.


The company (still under original ownership) centralized it's operations and manufacturing facilities to its plant in Victoria, Texas in 1962. The PowerCat Boat Company had been shipping boats to dealers and customers all over the country from both plants and closing the Bellflower California plant was a logical choice. Many of the people who had worked for the company in California decided not to make the move to Texas. One was Ray Leger's half brother Bobby Brown. He had been instrumental in the development of the new three point hydro design, which was proving to be an excellent drag/ski boat. Ray made an agreement to give a set of the molds to Bobby and he formed the CeeBee Mfg. Co. producing this boat under the name Avenger Boat Co. PowerCat then would not market that product on the west Coast, and Avenger went on to develop many designs of its own. 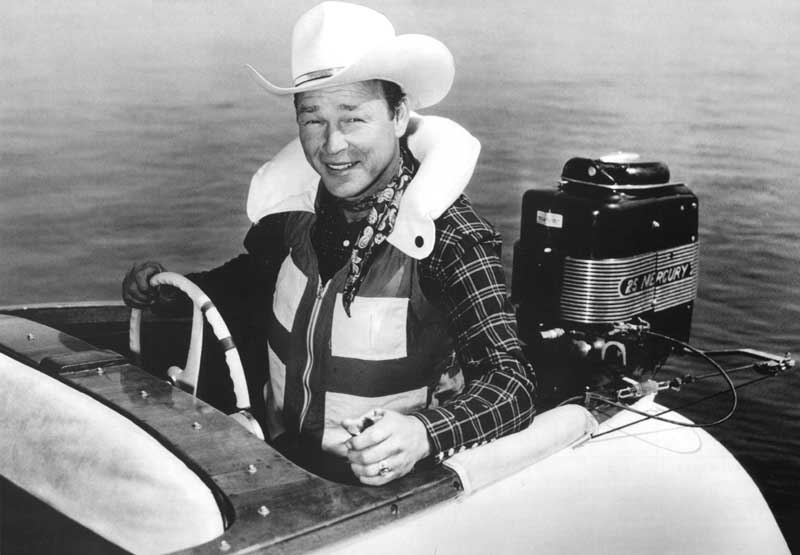 PowerCat from its new home base in Texas was at the highest level of production the company had seen. The primary product was shifting to the Tri-hull. The Tri-hull was an adaptation from the original catamaran designs that facilitated the use of a single engine. Due to the rising costs of fuel and engines Catamarans were becoming harder to sell. By the late 60's Catamarans were no longer being produced. 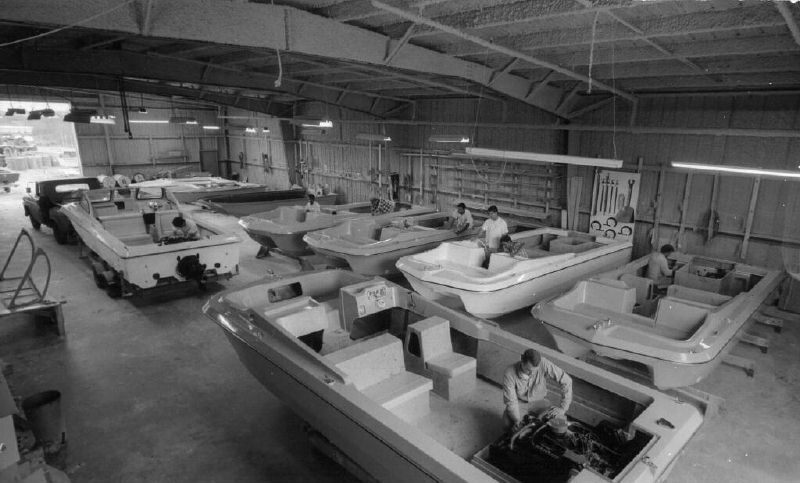 Fire completely destroyed the Victoria, Texas plant in 1966. The company was quickly restructured, and emerged from the ashes with new investors and was now known as the " Powercat of Texas Corp.". Soon thereafter the company's main product line was Bass boats and Tri-hulls. . 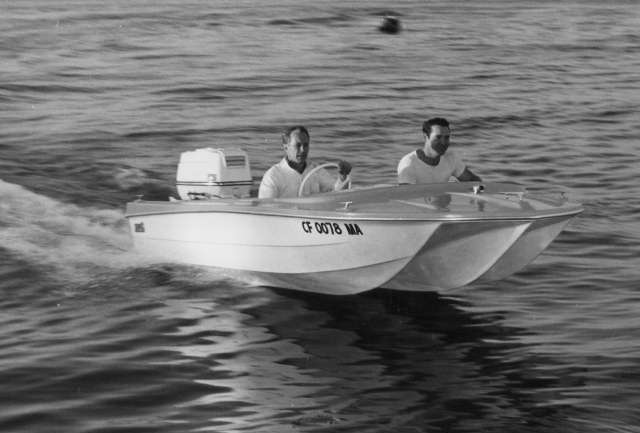 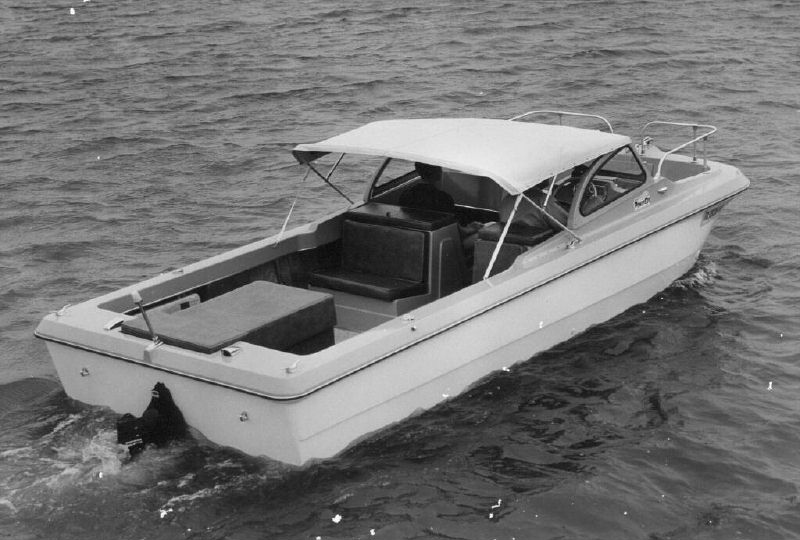 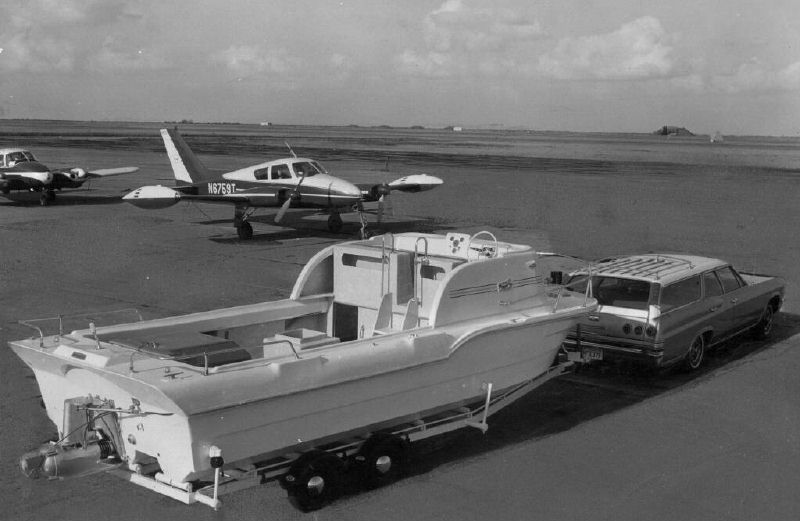 Ray Leger sold his interest in the company in 1972. 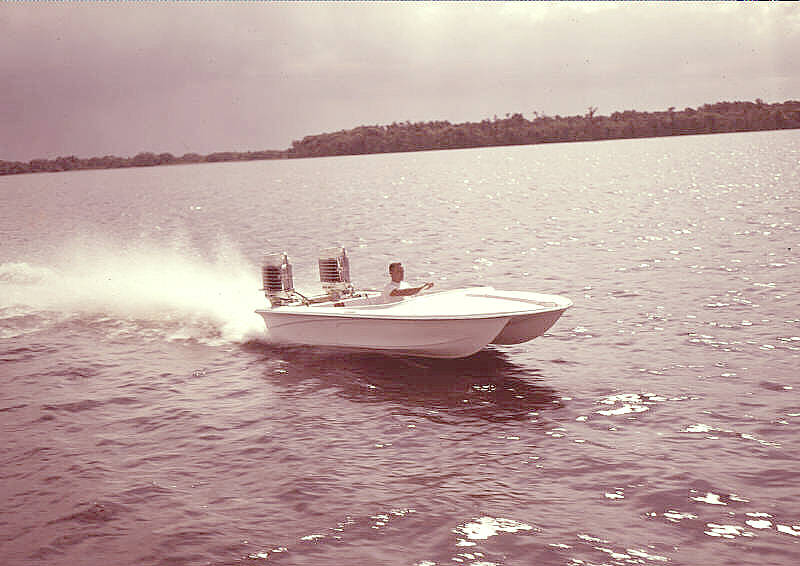 Old PowerCats can still be seen today running around on local lakes and Open waters ways being pushed by big twin six outboards of old. For more information on PowerCat and their boats throughout the years check out www.powercatboat.com